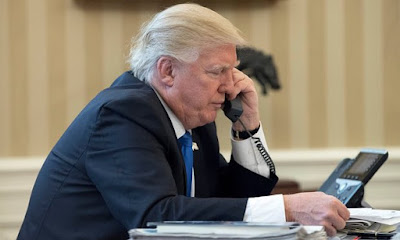 A spokesman for Angela Merkel said the German chancellor regretted Trump’s decision to ban citizens of certain countries from entering the US, adding that she had “explained” the obligations of the refugee convention to the new president in a phone call on Saturday.

“The chancellor regrets the US government’s entry ban against refugees and the citizens of certain countries,” Merkel’s spokesman Steffen Seibert said in a statement.

“She is convinced that the necessary, decisive battle against terrorism does not justify a general suspicion against people of a certain origin or a certain religion.

“The … refugee convention requires the international community to take in war refugees on humanitarian grounds. All signatory states are obligated to do. The German government explained this policy in their call yesterday.”

Seibert said the German government would examine what consequences the ban would have for German citizens with dual citizenship, and would “represent their interests, if necessary, before our American partners”.

A summary of the phone call between Merkel and Trump, jointly issued to the press on Saturday, had made no mention of the travel ban, emphasising merely the “fundamental significance” of Nato and the intention to “further deepen the already excellent bilateral relations in the coming years”.

The French president, François Hollande, said on Saturday that “when [Trump] rejects the arrival of refugees, while Europe has done its duty, we should respond to him”.

Hollande said that in an unstable and uncertain world, “withdrawal into oneself is a dead-end response”, adding that defending democratic principles required compliance with “the principles on which it is founded, in particular the acceptance of refugees”.

Crowds gather at US airports over the weekend to protest Trump’s immigration ban
In a tweet, Italy’s prime minister, Paolo Gentiloni, said his country was committed to the values that bind Europe: “Open society; plural identity; no discrimination.”

“What Trump’s doing on the other side of the ocean, I’d like it done here, too,” said Matteo Salvini. Referring to the hundreds of thousands of asylum seekers and economic migrants brought to Italy in the last few years after being rescued in the Mediterranean, Salvini said there was “an invasion under way which needs to be blocked”.

Ireland’s foreign affairs minister, Charlie Flanagan, said that while US immigration policy was a matter for the US government, “it is clear that the most recent decisions could have far-reaching implications – both on humanitarian grounds and on relations between the US and the global Muslim community”.

Iran’s foreign minister, Javad Sarif, said Trump’s decision would be recorded in history as “a great gift to extremists and their supporters … Collective discrimination aids terrorist recruitment by deepening faultlines exploited by extremist demagogues to swell their ranks.”