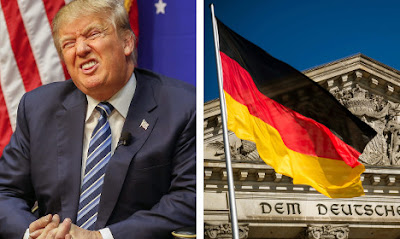 BERLIN – Germany may be next on Donald Trump’s hit list.

For months, the president-elect has railed against Mexico and China over what he describes as unfair trade practices.

Now, German officials are preparing for the wrath they believe is coming their way.

“The main focus of the debate is on Mexico and China. But when it comes to the issue of a trade surplus, Japan and Germany are the next countries on the list,” German Deputy Finance Minister Jens Spahn told POLITICO, following a series of unofficial meetings with members of Trump’s transition team in New York and Washington.

Ahead of Trump’s inauguration Friday, Spahn traveled to the U.S. last week for a series of informal talks with Trump allies, including Peter Navarro, the head of Trump’s newly formed White House National Trade Council.

During those talks, Spahn said he stressed that Germany’s massive trade surplus was not a strategy to support the German economy on the backs of international partners — the line Trump has taken when arguing against China’s trade policy.

“As we have been trying to explain to our European partners for years, this surplus is not a problem, but rather an advantage,” Spahn, a member of German Chancellor Angela Merkel’s Christian Democrats (CDU,) said in an interview at his office in the German Finance Ministry. “Considering that, for years, this has been proven hard to explain in Brussels, we will probably need a couple more rounds in D.C., as well.”

In April, the U.S. put Germany on a list of countries which Washington suspects are behaving unfairly to support their economies.
Germany exports significantly more than it imports, which is a source of consternation for many of its international partners, including the United States, who in the past have criticized Berlin for taking advantage of the trade surplus while at the same time not doing enough to spur imports.

Instead of investing the money they make, critics say, Germans prefer to save, preventing the recovery of crisis-ridden eurozone countries and slowing down global growth.

In April, the U.S. put Germany, along with China, Taiwan, South Korea and Japan, on a list of countries which Washington suspects are behaving unfairly to support their economies.

Germany’s current account surplus, a broader trade measure that includes the trade surplus, has almost doubled over five years, from around €145 billion in 2010 to €256.1 billion in 2015. The figures for 2016 have not been released yet, but monthly reports suggest that the surplus remains similarly high.

As Trump takes office, many in Berlin are concerned that Germany might soon find itself in his crosshair as China has done. But Germany doesn’t control its economy or the markets in the way that China does, Spahn argued.

“We need to make clear that there is a difference between the U.S. trade deficit with low-wage countries [like China] on the one hand, and with a high-wage technology country like Germany on the other hand,” Spahn said. “In the European Union, it’s the market that makes decisions at the end of the day.”

Referring to a recent interview with Bild, in which Trump said German cars are ubiquitous on the streets of New York while very few American cars are seen on German roads, Spahn said that, ultimately, it’s the consumers who determine what gets bought, not governments.

If “BMWs or Mercedes sells well in the U.S. while a Dodge sells rather poorly in Europe, it’s because of decisions made by consumers, not by the state,” he said.

The 36-year-old minister, who rapidly rose through the ranks of the CDU to become deputy finance minister within a decade, emphasized that reaching out to the incoming administration and its staff, many of whom are political newcomers, is a priority — especially as Germany took over the presidency of the G20 in December.

“In light of Germany’s G20 presidency this year, contacts with the new U.S. administration are particularly important,” Spahn said.

Merkel intends to use the G20 presidency to safeguard multilateral cooperation. In the light of Trump’s election victory, however, concerns have grown in the German capital that the international forum could lose much importance.

Meeting with Trump’s team, Spahn said he made it clear that for Germany, international organizations are, at this moment in time, “crucial for promoting dialogue and for providing a framework to coordinate” cooperation.

“If the new American president has suggestions for how to improve this, we are open for a conversation,” he said. However, he added, “one thing needs to be clear: The motto ‘We don’t care about multilateral cooperation’ is not our motto. This doesn’t solve a single problem – quite the opposite.”

“Trump is certainly asking justifiable questions and we need to be responsive,” he said. “It’s true that Germany, for example, has clearly missed the mutually agreed target of spending 2 percent of its budget on defense to reach the target that was agreed among NATO members.”

Particularly when it comes to Europe, it is important to seek contact with the new U.S. president and his administration on all levels to try and reverse any bad impressions he might have formed of the EU.

“It is not on that Nigel Farage was the first European politician to seek talks with him,” Spahn said, referencing to the Brexit advocate and former UKIP leader. “This, apparently, has left a disastrous image of the EU. All the more, we now need to make sure to tell him, self-confidently, what the EU is actually capable of. “

Read the full interview in English and in German.