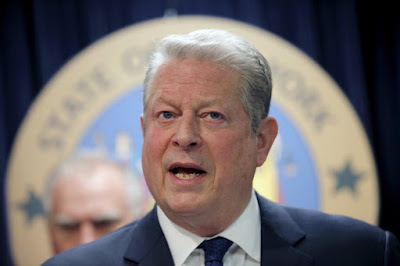 Former Vice President Al Gore is hosting his own climate change summit after the U.S. Centers for Disease Control and Prevention abruptly canceled the one it had been planning for months.

Gore announced Thursday that he’ll hold the Climate & Health Meeting in Atlanta on Feb. 16 with Howard Frumkin, former director of the CDC’s National Center for Environmental Health, and a host of other health and climate groups: the American Public Health Association, The Climate Reality Project, Harvard Global Health Institute and the University of Washington Center for Health and the Global Environment.

“They tried to cancel this conference but it is going forward anyway,” Gore said in a statement announcing the meeting. “Today we face a challenging political climate, but climate shouldn’t be a political issue. Health professionals urgently need the very best science in order to protect the public, and climate science has increasingly critical implications for their day-to-day work. With more and more hot days, which exacerbate the proliferation of the Zika virus and other public health threats, we cannot afford to waste any time.”

The event serves to fill the gap left by the CDC’s canceled Climate & Health Summit, which was intended to explore the “translation of science to practice” in dealing with climate change’s consequences on our health. Despite being in the works for months, the event was canceled just days before President Donald Trump was sworn into office.

The cancellation isn’t surprising given how politicized climate change is, Frumkin said.

“Sometimes the agency is subject to external political pressure; sometimes the agency self-censors or pre-emptively stays away from certain issues,” he told E&E News, who broke the news of the summit’s cancellation. “Climate change has been that issue historically.”

Sources inside federal agencies said this week that the Trump administration has started taking action to limit access to government climate change information. Sources inside the the Environmental Protection Agency say they’ve been instructed to stop sending out social media posts and press releases, that their grant program has been frozen and that the EPA’s main climate change web page may come down.
Publicada por Jeeves à(s) 01:38