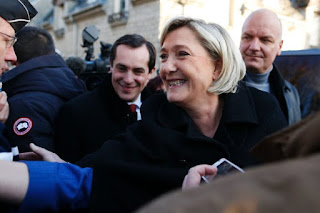 The tongue-in-cheek award will be given to the Western public figure who best exhibits “friendliness and appeasement” of Russian President Vladimir Putin’s foreign policy every week, the anti-Kremlin think tank said in a statement.

Le Pen was the first pick because she “relentlessly” supports Putin’s foreign policy, including the annexation of Crimea, the conflict in Ukraine and Russia’s military intervention in Syria.

The award is judged by a jury of researchers and journalists, which oversees the nomination process. The public can nominate candidates via Twitter.

The National Front press office was not immediately available for comment.