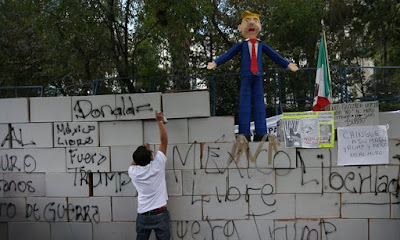 Donald Trump to order Mexico wall in national security crackdown
US president due to sign off executive orders, including a temporary ban on refugees from the Middle East

Donald Trump is due to sign off a volley of executive orders on national security, including measures to start the construction of a wall on the Mexican border and the imposition of a ban on refugees from the Middle East.

The new US president is expected to sign orders setting out federal funding for the wall during a visit to the Department of Homeland Security on Wednesday, two administration officials told the Associated Press.

He will also impose a temporary ban on most refugees and suspend visas for citizens of Syria and six other Middle Eastern and African countries, congressional aides and immigration experts briefed on the measures told Reuters.

According to a report in the New York Times, Trump is also considering measures that are even more contentious, including reviewing whether to resume the once-secret “black site” detention programme, designating the Muslim Brotherhood a terrorist organisation, and keeping open the Guantánamo Bay detention centre.

Trump appeared to preview the measures in a characteristic tweet late on Tuesday that said: “Big day planned on NATIONAL SECURITY tomorrow. Among many other things, we will build the wall!”

Trump has used executive orders as a very public show of swiftly undoing the work of the Obama administration and beginning to honour pledges made on the campaign trail. On Tuesday, he angered Native Americans and climate change activists by signing executive orders to allow construction of the Dakota Access and Keystone XL oil pipelines. On Monday, he reinstated the “global gag rule”, which bans funding for groups that offer abortions or abortion advocacy, even if they use their own funds to do so.

His latest orders are expected to involve restricting access to the US for refugees and some visa holders from Iraq, Iran, Libya, Somalia, Sudan, Syria and Yemen, said the aides and experts. By doing so, he looks likely to ignore Bana al-Abed, the seven-year-old girl whose tweets from Aleppo drew attention to the city’s devastation, who has urged Trump to “do something for the children of Syria” in an open letter.

Speaking on BBC Radio 4’s Today programme, he said: “We have seen legitimate cases of transnational terrorism of people travelling from one country to another to do terrorist acts. We have actually seen a number of them in western Europe, so a country putting in place prudent measures to interdict terrorist travel by making sure you are screening refugees and visa applicants appropriately is not in any way imprudent. And dealing with that while you’re also dealing with trying to prevent homegrown terrorist attacks at the same time to me just sounds like reasonable responsible national security.

“It doesn’t seem like an effort to persecute any religion or any particular people.”

Carafano conceded that the wall on the Mexico border would initially have to be paid for by the US government. “If the federal government buys a tank the only way it can do that is with federal dollar,” he said.

The restrictions on refugees are likely to include bans for several months on admissions from all countries until the state and homeland security departments can make the vetting process more rigorous. The US already has one of the most rigorous vetting processes in the world, and it can take up to two years of interviews and background checks for a person to gain admittance.

There is also likely to be an exception for those fleeing religious persecution if their religion is a minority in their country, a person briefed on the proposal told Reuters. That exception could cover Christians fleeing Muslim-majority nations.

Trump initially proposed a “complete and total” ban on Muslims entering the US, but has since said he would instead focus on restrictions on countries whose migrants could pose a threat.

Detractors could launch legal challenges to the moves if all the countries subject to the ban are Muslim-majority nations, said Hiroshi Motomura, of the UCLA School of Law. Legal arguments could claim the executive orders discriminate against a particular religion, which would be unconstitutional, he said.

“His comments during the campaign and a number of people on his team focused very much on religion as the target,” Motomura said.

To block entry from the designated countries, Trump is likely to instruct the state department to stop issuing visas to people from those nations, according to sources familiar with the visa process. He could also instruct Customs and Border Protection to stop any current visa holders from those countries from entering the US. During the campaign, Trump also floated the idea of a religious registry, a plan that would be likely to face challenges in the courts.

The White House spokesman, Sean Spicer, said on Tuesday that the state and homeland security departments would work on the vetting process once Trump’s nominee to head the state department, Rex Tillerson, is confirmed.

Other measures may include directing all agencies to finish work on a biometric identification system for non-citizens entering and exiting the US and a crackdown on immigrants fraudulently receiving government benefits, according to the congressional aides and immigration experts.

The Associated Press and Reuters contributed to this report
Publicada por Jeeves à(s) 04:05