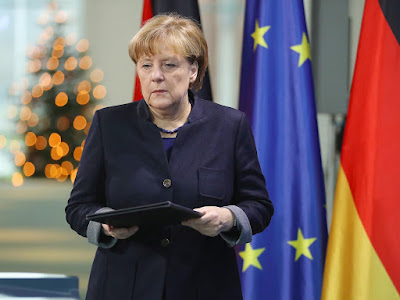 Frank-Walter Steinmeier said the Prime Minister's willingness to engage in a positive partnership with the European Union had been noted.

Ms May confirmed the Government’s intention to pull out of the single market when Britain leaves the EU, ending months of uncertainty and confusion following the June referendum.

In her landmark speech, she said the deal she would be pursuing when the negotiations get underway “cannot mean membership of single market”.

But she emphasised that Britain wants to remain a good friend and neighbour to other European countries.
“Finally a bit more clarity,” said Mr Steinmeier in a statement, adding that the other 27 EU countries want close and trusting relations with Britain and will aim for constructive negotiations.

“[Ms May] emphasised that Great Britain is seeking a positive and constructive partnership, friendship with a strong European Union. That’s good,” he said.

Angela Merkel is due to meet with German ministers tomorrow to discuss Germany’s position on Brexit.

Not all Germany's politicians had such a measured reaction, however.

“Many of the 52 per cent of Brits voting leave clearly believed that they would stay in a common European market. They’re f**ked together with the 48 per cent,” he added.

In a message on Twitter, Mr Tusk said: “Sad process, surrealistic times but at least more realistic announcement on Brexit. EU27 united and ready to negotiate after Article 50.”

Ms May said it would be in other countries' best interests to cooperate with the UK once it had left the EU.

“I know there are some voices calling for a punitive deal that punishes Britain and discourages other countries from taking the same path,” she said.

“That would be an act of calamitous self-harm for the countries of Europe. And it would not be the act of a friend.”

Ireland has also welcomed Ms May’s outline of the Government’s approach to negotiations with the EU.

“In her speech, Prime Minister May highlighted the specific and historic relationship between Britain and Ireland,” said the Irish government in a statement, reported RTE.

“In this context, she made clear that her priorities include maintaining the common travel area and avoiding a return to a hard border with Northern Ireland, both of which are welcome.”

The Prime Minister is understood to be planning to speak personally about her plan with Ms Merkel, French president Francois Hollande, Mr Tusk and European Commission president Jean-Claude Juncker in the coming days.